Africa Education Watch is an Education Policy Research and Advocacy Organization working with Civil Society Organizations, Governments and the Private Sector to promote an equitable, accountable and responsive education system that assures quality and equal opportunities for all.

African Education Watch urges universities to shut down until the impasse is resolved.
The statement released by them reads:

Close Down Universities Until Impasse Is Resolved

11 Outstanding Issues Of The Teacher Unions

It has been 22 working days since members of the University Teachers Association of Ghana (UTAG) embarked on an industrial strike demanding enhanced conditions of service. The strike was declared on the 10th of January 2022.

The majority of students on campus are freshmen who have not even been matriculated. These freshmen have had no academic direction since they arrived in the universities to meet a university community without academic activity or supervision by their lecturers and councillors due to the strike.

Their continued stay on campus without academic activity has economic and social consequences on them and their families back home, as they continue to incur expenditures they otherwise wouldn’t have incurred if they were home.

On the labour front, five weeks of industrial action is yet to achieve any significant progress in negotiating a settlement to the impasse.

In view of the increasing social and economic cost of staying on campus with no academic activity, the absence of academic direction for freshmen on campus, and the apparent lack of an imminent negotiated settlement of the impasse, it will be in the best interest of students; freshmen especially, and their families for the schools to be closed down.

We, therefore, call on Vice-Chancellors to close down all public universities until the UTAG strike is called off. 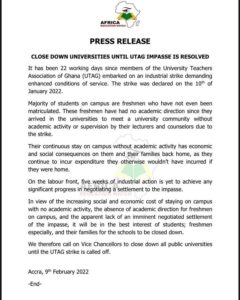 11 Outstanding Issues Of The Teacher Unions

UCC School Of Business Honours 299 Students With An Average CGPA Of 3.6