by Magdalene Abedi
in Technology
Reading Time: 2 mins read
0 0
A A
Donate
0

Bill Gates has shared his 48-year-old resume on a job-seeking app known as LinkedIn.

Bill Gates is known as the fourth richest man in the world.
He is the co-founder of Microsoft and he has a lot of achievements he has acquired that he recently shared with the world.

Bill Gates shared the content of his resume from the time he was in his first year at Harvard College at 18 years of age.
Along with the CV, he wrote, “Whether you are a recent grad or a college dropout, I’m sure your resume looks a lot better than mine did 48 years ago.”

Details: Microsoft Teams Up With ONDC To Release A Shopping App In India

His resume shows the several skills he has in the field of computers.
His resume reveals he had taken courses like Operating System, Structure Database Management and Computer Graphics which he had A’s in all these courses.
He stated in his resume that he had experience in programming languages such as ALGOL, LOGOL, BASIC and FORTRAN.
He also added his experience as a co-leader and co-partner of a contract at the Lakeside School, Seattle in 1972.

Despite his claim that other people’s resumes are better than his, social media users think otherwise. They are stunned at his perfect resume.
A social media user known as Martha Congreas stated, “Thanks for sharing Bill Gates because you know… It does show that you gotta start somewhere and it’s really about the confidence.”

“Oh finally…nice!!!! Your CV looks similar to mine when I was 21 years a bit older (wrote a couple of big apps, knew most languages, machine assembly and control languages so I least I know I was on the right and enlightenment path. Always wanted to stay close to people I could learn from. I still do. Enjoy life and light fully of the weight and knowledge.” – Raffaele Andrease 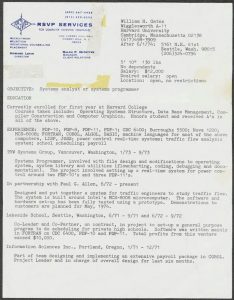 Details: Microsoft Teams Up With ONDC To Release A Shopping App In India

Internet Explorer Will No Longer Function From Today