by Enoch kwameDoh
in Local News
Reading Time: 1 min read
0 0
A A
Donate
0

The Ghana Private Road Transport Union of TUC Ghana (GPRTU) days earlier issued out a statement of they embarking on a strike action on 6th December. This had to do with the high cost of fuel prices.
This action start early this morning, where a lot of people were stranded as a result of not getting any vehicle to convey them to their various destinations.

The leadership of the Union had been invited to Presidency during the course of the day.

As a result of that, a statement issued by Godfred Abulbire, the General Secretary had called all GPRTU drivers to suspend the strike and return to work immediately.

“The in tended strike action which was scheduled to take effect today Monday 6th December 2021 has been suspended.
The Leadership of the Uniom had been invited to the Presidency during the course of the day.

Development will be communicated to members.
We therefore entreat our cherished members to go back to their normal duties. 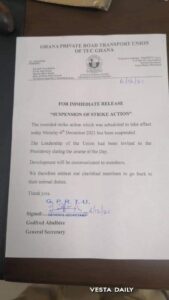