The union revealed they made several calls on the government to grant them a 20 percent Cost of Living Allowance to the teacher and educational workers of pre-tertiary educational level due to the increasing level of inflation in the country but it fell on deaf ears.

The Union held press conferences on 24th February 2022 and 20th May 2022 to discuss this issue.
Thomas Musah the General Secretary of GNAT said they can no longer bear the hardship and the inequality of salaries in the public sector of the country. The government was given a deadline of June 30th,2022 to solve the problem but the government failed to meet their demands hence their reason for the strike action.

Following the indefinite nationwide strike, the Ghana Education Service(GES) has released a statement to clear the air on the issue.
In the statement released by GES on 5th July 2022, parents were advised to remain calm and assured that management is closely monitoring the situation and will advise on the way forward accordingly.

Accordion to the GES PRO, Cassandra Twum Ampofo, “management has invited the leadership of the union to a meeting to discuss the development and the way forward.”
Meanwhile, basic school heads are urged to keep schools open and closely supervise are the children who report to school pending further direction from GES. 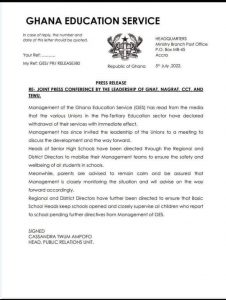