by Vesta Daily
in Entertainment
Reading Time: 1 min read
0 0
A A
Donate
0

Sister Derby should be congratulated on her engagement to her lover, David, according to reports.

Sister Derby has yet to make an official announcement, but she has publicly shown her engagement ring.

In a Snapchat video, the singer, who was accompanied by her now-fiancé, flaunted her two-layer silver and diamond ring.

I Met My Husband In A Nightclub – Gospel Musician 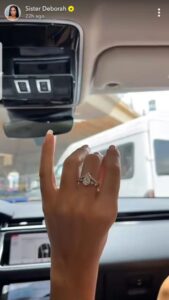 As he took her to her professional photography, they were photographed in a lovey-dovey mood.

The pair are blooming strong and determined to take their love to the next level, despite the constant drama and threats from David’s baby mom.

I Met My Husband In A Nightclub – Gospel Musician

Chief of Sefwi Elubo And His Brother Arrested For Illegal Mining

Chief of Sefwi Elubo And His Brother Arrested For Illegal Mining