by Vesta Daily
in Local News
Reading Time: 1 min read
0 0
A A
Donate
0

The Public Services Workers Union (PSWU) is set to go on strike on July 19 in order to demand a 20% Cost of Living Allowance (COLA).

The union will join the pre-tertiary education sector’s strikers, who have been on strike since last week.

Various organizations, including the Union of Professional Nurses and Midwives, have joined calls by some government employees for the government to pay the 20% allowance.

According to a statement, the strike was called in response to the government’s failure to act on the request for the allowance, which came amid an increase in inflation and the cost of living in Ghana.

“In the midst of rising living costs, inflation currently pegged at 27.6 percent (with a proclivity to rise further), and looming astronomical increases in utility tariffs, the economic analysis that served as the foundation for our acceptance of a one-year salary increase for the year 2022 has clearly been thrown out of gear.”

“In light of the worsening economic challenges, members of the PSWU have no choice but to draw attention to their economic well-being,” the statement continued.

The strike decision was made at an emergency meeting on July 8. 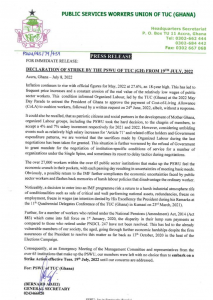