Singer, Yemi Alade Replies Man Who Advised Her To Collaborate With Her Female Colleagues

by Enoch kwameDoh
in Entertainment
Reading Time: 1 min read
0 0
A A
Donate
0

Yemi Alade has replied to a Twitter user by the name of Daniel Regha, who advised her to collaborate with her female colleagues this year to boost her career.

Yemi Eberechi Alade is a Nigerian Afropop singer, songwriter, actress and activist. She won the Peak Talent Show in 2009 after which she signed to Effyzzie Music Group, and had a hit with her single “Johnny” in 2014. Since then Yemi has gained prominence in the music industry and is considered one of the biggest artists in Africa. Following the releases of her albums King of Queens and Mama Africa with the huge commercial success recorded for both albums, this made her embark on world tours consecutively.

The Twitter user who gave this advice to the singer noted that the Nigerian music industry is male-dominated and barely gives room for female artists to thrive.

Mummy Dolarz Back Again With A New Shot At Big Ivy

According to him, to boost her career, the Johnny crooner should endeavour to collaborate with other female artists, especially Tiwa Savage.

“Yemi Alade u should try collaborating with other female artists this year, especially with Tiwa Savage; The music industry is male-dominated & barely gives room for females to thrive which is more reason why u ladies should stick together as one, it will boost ur music careers”.

On sighting the tweet, Yemi Alade quoted it and gave a sarcastic response. 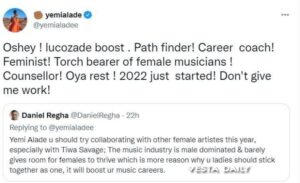 Mummy Dolarz Back Again With A New Shot At Big Ivy

I Did No ‘Tummy Tuck’ But Liposuction- Nana Ama McBrown