The Hummer Is Coming Back All Electric

by Vesta Daily
in Automobile
Reading Time: 8 mins read
0 0
A A
Donate
0

On March 22, 1983, the Pentagon awards a production contract worth more than $1 billion to AM General Corporation to develop 55,000 High Mobility Multipurpose Wheeled Vehicles (HMMWV). Nicknamed the Humvee and designed to transport troops and cargo, the wide, rugged vehicles entered the spotlight when they were used by the American military during the 1989 invasion of Panama and the Persian Gulf War in the early 1990s.

In 1992, a civilian version of the Humvee, known as the Hummer, went on sale. The hulking, attention-grabbing road warrior tipped the scales at some 10,000 pounds and got less than 10 miles per gallon. It was an early hit with Hollywood celebrities such as Arnold Schwarzenegger, who went on to own a fleet of Hummers. In December 1999, when the economy was strong and gas prices were relatively low, General Motors purchased the rights from AM General to market and distribute the Hummer. In 2002, the Hummer H2, a smaller (some 8,600 pounds), less expensive version of the original model, debuted.

The Hummer became a symbol of America’s super-sized lifestyle; however, the gas-guzzling vehicle was also a target of heavy criticism from environmentalists. According to a 2008 report on Salon.com, in August 2003, “Hummer-hating eco-vandals [struck] four car dealerships in Southern California’s San Gabriel Valley, destroying, defacing and burning dozens of Hummers and other SUVs, while scrawling love notes like ‘Fat, Lazy Americans’ about the premises.”

In 2005, the Hummer H3, an even smaller (5,800 pounds), more fuel-efficient (16 to 20 miles per gallon) vehicle, was released. The following year, GM ended production of the original Hummer, due to low sales. In 2008, as Americans faced a growing economic crisis and rising gas prices, along with increasing environmental concerns, Hummer sales shrunk by more than 50 percent. In December 2008, GM, which was hard hit by the global recession and slumping auto sales, received a multi-billion-dollar federal bailout loan in order to stay afloat. On June 1, 2009, the auto giant, which until 2008 had been the world’s top-selling maker of cars and trucks, filed for Chapter 11 bankruptcy protection. The following day, GM announced that as part of its reorganization plans it would sell the Hummer brand to a Chinese machinery company.

Kantanka To Roll Out New Car With Fingerprint Ignition

All you have to know about the new Jeep Wagoneer

GMC reveals the electric Hummer as the supertruck of the future

Few vehicles are as instantly recognizable as the military AM General HMMWV, which of course spawned General Motors’ Hummer division, a lineup of SUVs and trucks sold in the 1990s and 2000s. A casualty of a tanked global economy and rising ecological concerns, the brand died in 2010, but the name will return on the 2022 GMC Hummer EV, revealed today.

Rumors started swirling last year that the vaunted Hummer name would come back to GM’s lineup as an all-electric premium off-roader. Then, in January, we got our first look at a teaser of the electric Hummer, learning that it would be branded as a GMC when it returned – a move that likely saves GM some cash by not having to spin off yet another vehicle division.

In spite of its “Professional Grade” parentage, the Hummer EV will be instantly recognizable, thanks to its open-air design and signature styling cues. GM’s proprietary Ultium battery technology, which it will share with Honda, will give the Hummer a range of 350-plus miles.

The Hummer EV leaves no question as to its heritage, although the pickup’s styling is sleeker and more modern than its H1, H2, and H3 forebears. Unusual H-shaped headlight elements replace the round units found on those off-roaders, with a full-width LED light bar proudly bearing the Hummer wordmark, each letter separated by seven vertical “grille” slats in an homage to the internal-combustion original.

As we’ve seen in previous teasers, the electric Hummer gets a very upright windshield that recalls the vertical glass of previous models while still preserving some aerodynamic efficiency. A high beltline and narrow side glass echo the old H2’s gun-slit greenhouse, but the angled C-pillar is like nothing else from Hummer’s repertoire and provides some sense of forward-leaning motion. Wide box flares on the front and rear fenders provide plenty of clearance for standard 35-inch Goodyear Wrangler Territory mud-terrain tires – and the electric Hummer has room for giant 37s, if you’re so inclined.

At the rear is a smallish cargo box, accessed via a MultiPro tailgate like the one found on the GMC Sierra. A power-operated tonneau cover secures cargo and improves aerodynamics when needed. Unlike the Hummer H2 SUT, the GMC Hummer EV has a fixed rear bulkhead, so longer cargo will have to sit on the tailgate (after being properly secured, of course).

A beefy skid plate is the first indicator that GMC is serious about the Hummer EV’s off-road ruggedness – strategically located underbody steel plates protect vital drivetrain components like the floor-mounted battery packs. That Ultium battery structure provides enough platform stiffness to allow for an open-air “Infinity Roof,” featuring three transparent panels that can be removed and stored in the large “frunk,” or front trunk. One large panel spans the width of the front row, with two half-panels over the left and right sides of the rear seat. Meanwhile, power-dropping rear glass opens up the cabin even more.

The airy cockpit gets an extremely tech-forward approach befitting the truck’s premium positioning. The Hummer features a massive 13.4-inch infotainment screen and a 12.3-inch digital instrument cluster. There’s a wealth of functionality in the system, too. Off-roaders – and mall crawlers – will appreciate the UltraVision front and rear underbody cameras that show a live view of what’s under the truck, making wheel placement (or parking) easier and more convenient. Other cameras provide a maximum of 18 different views.

The optional, unusually named Watts to Freedom mode activates an immersive driving experience that also unleashes the full capability of the EV powertrain for maximum acceleration. GM claims 0 to 60 miles per hour can happen in as few as three seconds in this mode.

In tamer driving, off-road widgets in the infotainment display and instrument cluster inform the driver of the vehicle’s torque output, locking differential status, tire pressure, pitch and roll angles, torque split, and more. The hoon within all of us will also like the “drift gauge,” that keeps a running tally of the Hummer’s maximum drift angle.

At launch, the 2022 GMC Hummer EV will take marching orders from three electric motors that offer a GM-estimated 1,000 horsepower (746 kilowatts) and laughable 11,500 pound-feet (15,592 newton-meters). Pardon our skepticism, but we’re all but certain that number is far from credible – it likely represents torque where the tire meets the road, which is always higher than what’s made by the actual powertrain. According to reporting from Car and Driver, the electric motors probably produce closer to 800 lb-ft (1,085 Nm), a number that would be more impressive had GM stuck to it rather than giving into the temptation to trump up its numbers.

One Hummer EV boast that requires no caveats is its impressive 800-volt DC fast charging, compatible with chargers of up to 350 kilowatts. Credit GM’s Ultium batteries here, which can swap from parallel to series mode while charging, adding up to 100 miles of range in 10 minutes. GMC hasn’t announced the battery’s size just yet, but the 24-module, double-stacked pack provides an estimated range of 350-plus miles.

The thoroughly modern Hummer offers four-wheel steering, including an already-teased CrabWalk feature that angles the rear wheels in phase with the fronts at low speeds, improving maneuverability in certain conditions. We’re not exactly sure when such a thing would be handy off-road, though – perhaps when traversing a hillside laterally. Hopefully, the Hummer’s four-wheel steering also allows the rear wheels to turn out of phase with the fronts to reduce the turning radius. That claimed wheel torque will undoubtedly be a boon over obstacle-strewn paths, particularly GMC claims that the Hummer EV can scale 18-inch verticals.

An adaptive air suspension can raise the Hummer up to 6 inches, although the company hasn’t released off-road geometry figures yet. Still, we assume that it will offer impressive ground clearance and approach, departure, and breakover angles, especially given the claim that it can ford more than 2 feet of standing water. 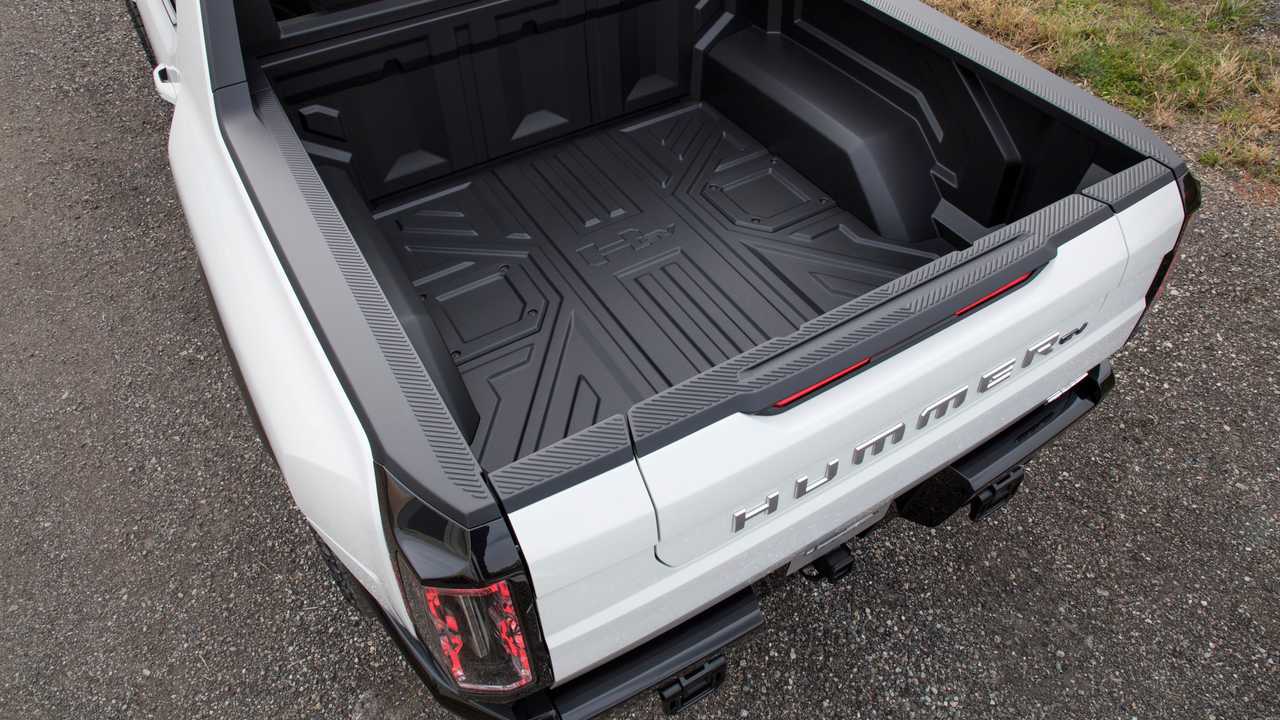 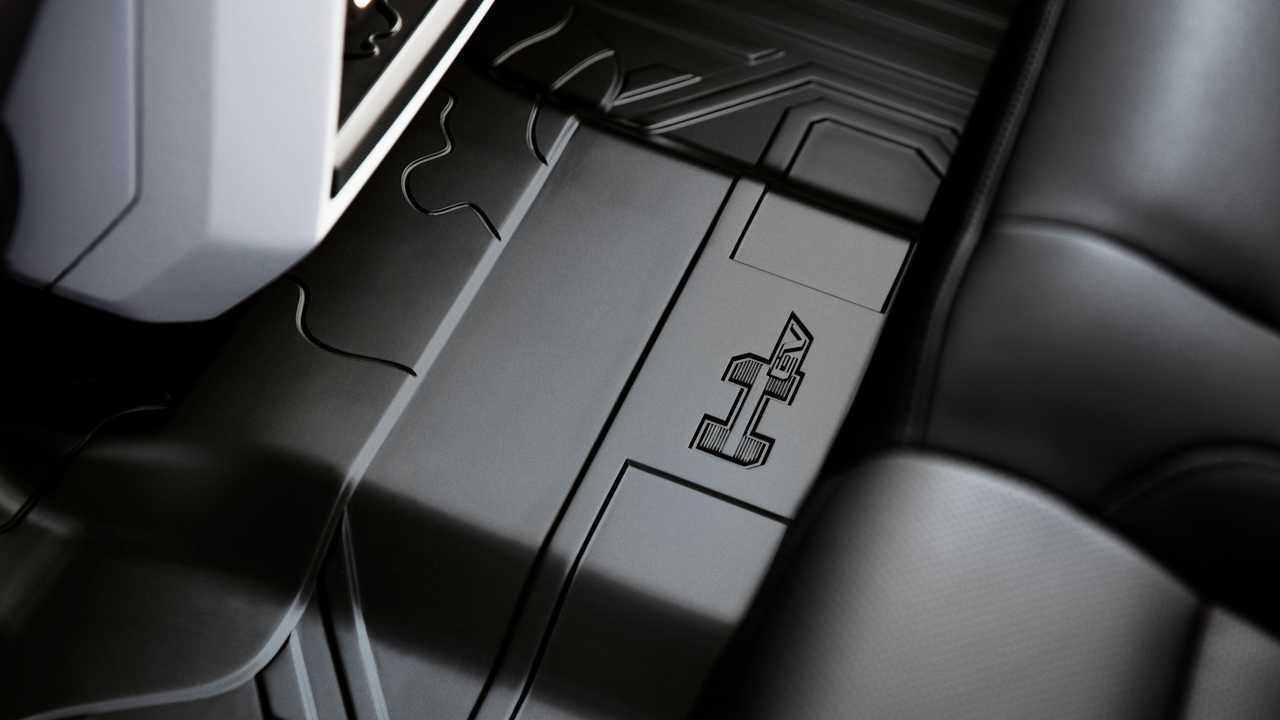 What’s more, the electric Hummer should be as capable on-road as it is off. GM estimates that the tri-motor launch vehicle will sprint to 60 miles per hour in just 3 seconds, a number that would shame any number of performance cars and just about keep up with Tesla’s claimed 2.9-second Cybertruck. And when it’s time to relax a bit, the Hummer EV is available with Super Cruise, GM’s hands-off driver assistance feature. The latest version of Super Cruise even detects when a lane change would be optimal, initiating the maneuver and using the turn signal appropriately.

The first electric Hummer up for grabs is the $112,595 Edition 1, which will be the only model available when the pickup arrives in Fall 2021. Every Edition 1 will be identically equipped, painted white and outfitted with an attractive, modern Lunar Horizon interior. Like most launch specials, the 2022 GMC Hummer EV Edition 1 is fully loaded, including the Infinity Roof, Watts to Freedom drive mode, adaptive dampers, an Extreme Off-Road Package (underbody armor, rock sliders, and those 35-inch tires), and four-wheel steering with CrabWalk. Super Cruise also comes standard on the Edition 1.

In Fall 2022, one year after the Hummer’s initial launch, a $99,995 variant called the EV3X will arrive with a three-motor powertrain, adaptive air suspension, Watts to Freedom mode, CrabWalk, and active torque vectoring. Then, in Spring 2023, we’ll get the $89,995 Hummer EV2X, which offers CrabWalk, adaptive air suspension, and a two-motor electric powertrain. Fleshing out the lineup in Spring 2024 will be the two-motor EV2 base model, foregoes most of the EV2X’s off-road goodies to hit a base price of $79,995.

Kantanka To Roll Out New Car With Fingerprint Ignition

All you have to know about the new Jeep Wagoneer

The Automobile Industry In Africa